Holland’s Motors Ltd, a Christchurch based car sales business on Shakespeare Rd and now with a branch in Timaru, was birthed from humble beginnings. 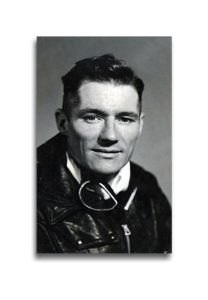 Alison and Mick Holland were married in 1941. Mick had just returned from a stint as a high achiever on the motor-cycle racing circuit, riding speedway, road racing and miniature tt, the equivalent of today’s motocross. Mick acquired a reputation as a strategic thinker a high flyer with the certificates and trophies to prove it.

At this point Holland’s owned the business, but were renting the premises, and when a window of opportunity presented itself Mick and Alison bought the land and buildings.

Mick’s passion for motorcycle racing and with technology progressing at the speed of light, the business transmuted from pushbikes to motorcycles. For Mick this was like sliding on a well worn and loved glove. Knowledge is power. Combine that with passion and what you have is the power of one.

Looking for a business opportunity, a friend knew of a cyclery shop for sale, and thought it might be worth a look to observe the traffic flow. Mick and Alison took the punt and opened for operation, a small shop selling pushbikes. One, a new Swedish brand with thin wheels, very good quality and another the new English Humber,which could be purchased for around 12 pounds. 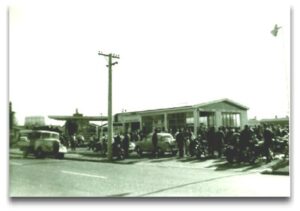 Alison and Mick became licensed to import brand new motorcycles, but were squeezed out by a bigger company. Not thwarted by obstacles, the team went on to sell Jawa and Suzuki bikes.

In 1964 with the assistance of the Shell Oil Company, they built a service station with a huge show room to display the range of Suzuki Motorbikes… This was virtually unheard of in those days and became somewhat of an icon.

Another crisis! Prior to 1980 the council in their divine wisdom decided to widen the road. Holland’s were left with no option and were unable to continue with the service station.

The Chinese word for crisis is opportunity and Mick saw a paradigm shift occurring. A move from bikes to cars. Eager to move with the wave and not afraid to put his toe in the water, Mick jumped in and launched into car sales. Car customers were different to the bike boys and soon a decision was made to just focus on cars. Do it once and do it well. 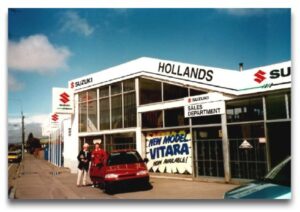 Alison semi- retired after 33 years, just prior to the introduction of the cars. Remember, behind every successful man there is a dynamic woman.

Holland’s is a family business and their son Gordon worked with them and shared Mick’s love of racing. A dare devil on the track, Gordon loved racing, speed bikes, cars and applied himself to learning the ropes.

Alison was very proud of her son Gordon. She believed him to be a man of integrity with good principles, honest, reliable, and dedicated to the business.

Mick retired at 60 and Gordon took up the torch and continues to run with it. Supported by a strong family, Win, Gordon’s wife plays an important integral role in operations.

For Bell it was the telephone, for Watt it was the light bulb and for Gordon Holland it was and is Cost Free Servicing.

Gordon funds cost free servicing out of his own pocket as a loyalty programme. Gordon believes that the best form of advertising is word of mouth. One happy and satisfied customer will generate on going business. Cost free is a service, repair and maintenance programme all rolled into one. Holland’s believe this to be the world’s best warranty.

Holland’s continued to grow and expanded their operation opening a branch in Timaru October 2001, purchasing the land and buildings in 2003. Progressive in their own right Holland’s Suzuki Cars in Timaru are making their mark on the landscape.

With Gordon Holland’s ability for forward thinking, you can be assured Holland’s will be here for many years to come.

There will be more to tell in the future, but in the mean time bear this in mind,

“A REDWOOD TREE GROWS FROM A SMALL SEED'”.